Mauritania is a heaven of tolerance. / Ely Ould Sneiba The Allegations that Mauritania is a new apartheid are monstrously wrong. The so-called human rights activists who claimed it do not mean it at all; it is an overstatement wrongly and unashamedly voiced to mislead the international community for compassion and then fundraising.

Branding this land of ethnic and cultural mixing as racialist is a monstrosity, fundamentallyrefuted by facts, by the very truth.

Here in the land of men, as the French novelist Antoine de Saint-Exupery says, met at different periods of history ethnicities coming from different horizons. These ethnic groups are of African and Arab cultural backgrounds and they lived peacefully side by side for many centuries.

However, things began to grow wrong on the eve of independence in 1960 with the advent of Black nationalism whose militants sought to maintain a Black racial identity for the Fulani, Soninke and Wolof people. Furthermore, they advocated for a race-based fifty-fiftydistribution of power and wealth.

At the linguistic level, the Black nationalists discarded Arabic and tried hard to impose French, to use it as the language of national unity since African languages were only in their infancy, and no African country even now uses any of them as his official language or make it part of his national curriculum.

To overcome this cause of disagreement, the Black doctrinaires propose translation as long as their Arab fellow citizens are the translators.

The Moors (Arabs), the main dominant group, consider Black nationalism as schismatic, as an attempt to reproduce a new apartheid system, initiated this time by the Black themselves in order to evade national integration. The Arabs are for the Republic and against racial political partitioning.

Against all logic, the Black agitators fight for separated development, whereas the establishment (both Arab and Black) strives against division and look forward to building a medium-term integrated colourless society made up of free and equal citizens.

To secure national cohesion, the Arab leaders claim that Arabic is the way out because, before French colonization, it was the historical language of science and Islamic religion forall the national ethnic groups including the Fula, Soninke and Wolof people.

As a result, the nation is torn between two conflicting approaches; and whenever a Blackman, or a group of them, is frustrated or unhappy with governmental decisions or actions, he stamps the State with the apartheid label. It is child's play. It is mere common parlance, one might say.

Furthermore, FLAM (a Fula racist movement) is no longer the only Black radical movement on the national arena. The anti-slavery Association (IRA), mainly Haratin (former slaves)who are Black but Arab in terms of cultural background, joins in the –''party'' and uses the same racist propaganda for political and financial ends: '' the Black population in Mauritania is still in chains, enslaved and under the rule of Apartheid''.

Actually, Slavery is officially abolished in Mauritania since 1981, and recent laws have been past to strengthen the existing legal instruments as a way to get rid of this ill-timed and savage system.

Likewise, Mauritanian law punishes drug trafficking; and what about if the national policereports seizures of some cocaine somewhere on the huge national territory, does it mean that Mauritania is another Columbia?

Not at all, compliance and full implementation of law along with mindsets change do not come at once; it is a long and exacting task. Some smuggling might happen but drug trafficking is a crime anyway. That is to say, that some slavery aftereffects may exist but slavery per se is over and forever.

It is good to know as well that the former American president, Abraham Lincoln, abolished slavery in 1861. Did his Emancipation Proclamation put an end to Black captivity?

No, one hundred times no!, '' 100 years later the Negro still is not free'', M.L. King said it in 1963 at the ''March on Washington'' for civil rights. In the same year, J.F. Kennedy in his historical speech lamented the interval in time between the legal end of slavery and its extinction: ''One hundred years of delay have passed since President Lincoln freed the slaves , yet their heirs , their grandsons , are not fully free. They are not yet freed from the bonds of injustice. They are not yet freed from social and economic oppression.''

Whatsoever, anti-racism and anti-slavery causes remain bankable on the international market, purchasable by the Zionist customers and by all sort of detractors of the Arab and Islamic nation of Mauritania.

Worse, an ethnic tension is now in preparation by the same agitators for the double purpose of raising funds and paving the way for asylum seekers in America, Canada and Europe.Fleeing by boat is risky; getting Mauritanian people to hate each other for shedding blood is easier. In this respect, the 1989 racial crisis was a panacea. Thousands of Black Mauritanian nationals found refuge in Western countries, even great numbers of West African adventurers managed to buy refugee cards as Mauritanians…

To be honest, Mauritanian governments with the adhesion of most of the intellectual elite and the political class did their best. However, Poverty and illiteracy need control, for the benefit of all, not only the former slaves. Therein lies the problem.

A piece of advice to finish: philanthropists and human rights defenders all over the world, ifyou are told, ''with such high zest…the old lie'' that slavery and apartheid exist in Mauritania, be on guard, the messengers of ''justice and peace'' are ill-motivated! 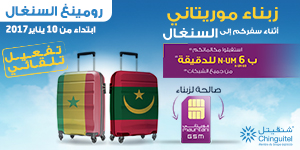